In DEF CON 26, I gave a speech about this topic on Packet Hacking Village, and demonstrated my tool (firstorder) in Demo Labs. I got very good feedbacks for my idea, however some people seem to be confused about all these. So I want to explain everything in a blog post for better understanding. If you detect anything wrong or if you have some better ideas, please let me know.

We wrote a tool called firstorder, which analyses the network traffic and identifies normal traffic profile. With this information, it configures Empire’s listener. So with this listener, we have a good chance to evade listener-agent communication from an -application layer- anomaly based NIDS, since we are matching with normal traffic profile.

Since the beginning of computer security history, perimeter defenses (firewalls etc.) are playing an important role. But as we can observe from recent breaches, perimeter defenses are not holding attackers out from an organization’s network. A good crafted spear-phishing e-mail usually enough to gain a foothold on the network. More and more attackers are using these techniques to bypass these defenses.

As attacker profile has been changed by time, traditional defense approaches are changing too. Today, organizations and red teams are mostly focused on ”assume breach” approach. Assume breach is simply accepting that, attackers are bypassed your perimeter defenses and got a foothold on your network. So, an organization should focus on defense strategies as per that way. Also, red teams will be focused on post-exploitation instead of passing perimeter defenses. So rather than traditional vulnerability scanning, testing activities becomes a cat and mouse game between attackers and defenders.

We can show NIDS as an initial step for detecting attackers on the network. We can talk about two main types of NIDS: they are signature-based and anomaly-based.

Signature-based NIDS refers to the detection of attacks by looking for pre-defined patterns of previously known attacks. They compares each network packet with those pre-defined patterns. If they match, we have a malicious traffic. There are very good and open source projects out there such as Snort and Suricate. The downside of these systems is since they only catch known attacks, they won’t be able to catch new type of attacks.

So how can we evade a signature-based system? We shouldn’t match with any pre-defined pattern. All we have to do is changing the traffic elements such as packet size, headers and some known strings, maybe we can apply some encoding methods, and we are good to go.

Anomaly based systems are bit sophisticated than signature based systems. Anomaly-based NIDS refers to building a statistical model describing the normal network traffic, and flagging the abnormal traffic. To do that, it analyzes the normal network traffic (like daily user activities) and applies various data science techniques to build a pattern. These kind of systems are exists, but they are usually commercial products not open source projects. There are also some theoretical concepts described in various of researches but they are not practical yet. Anomaly-based system have a chance to catch new type of attacks.

We can show the overall process in a basic chart: 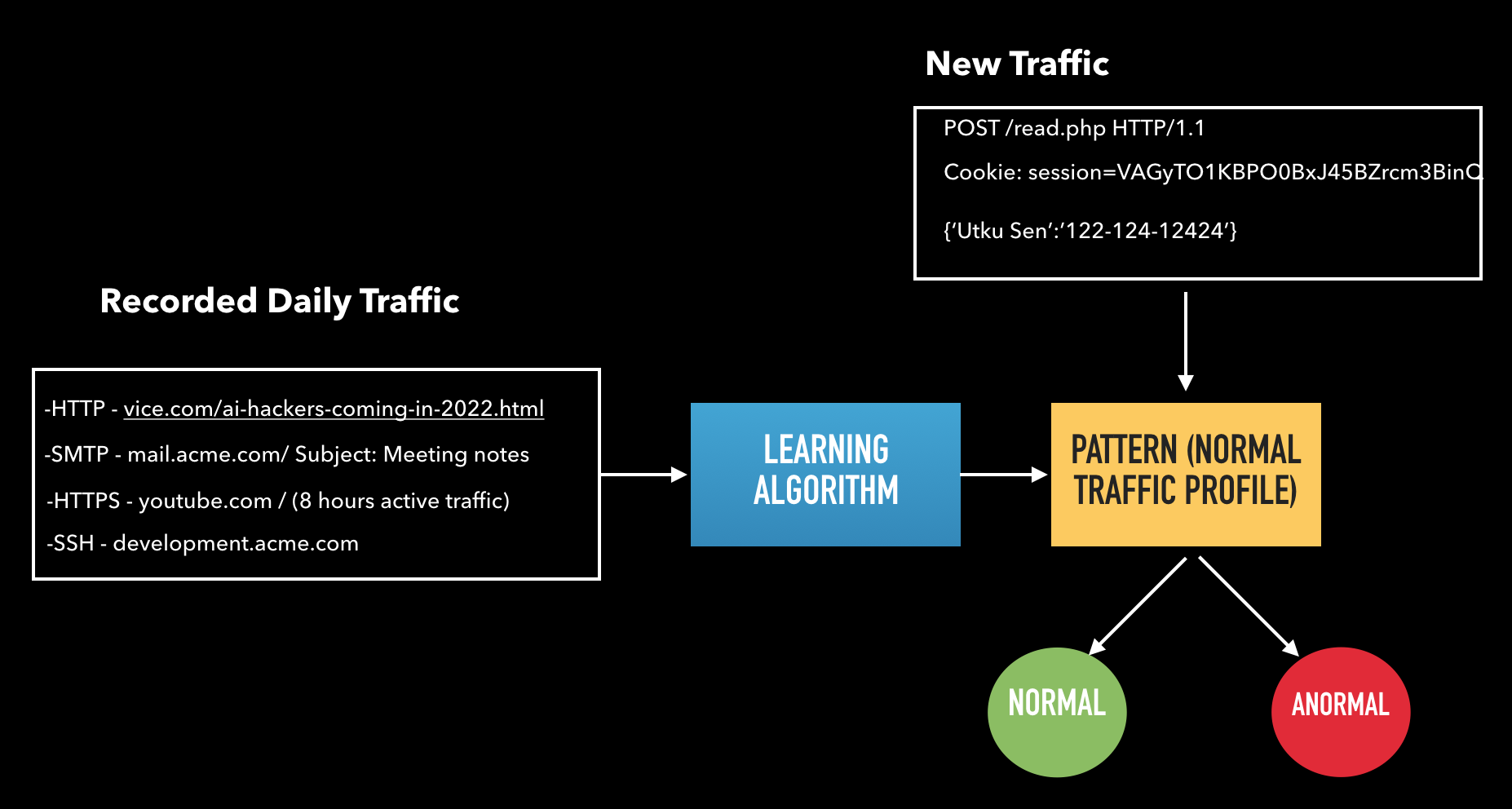 Anomaly-based system should record the daily traffic first. What do we mean by daily traffic? It can be visiting a news website, sending an e-mail via SMTP or accessing a server via SSH etc. After then, that capture data will be given to the learning algorithm. Algorithm will be trained by this data to create the normal traffic profile. After then, this program listens to network traffic and compares each packet with the normal traffic profile. If it’s not fit the normal profile, it flags it as anormal traffic.

As we know that anomaly based system needs to capture and analyze a regular network traffic in order to build a pattern. So we are assuming that during traffic capture, only legit users are generating legit network traffic. So that we are expecting that anomaly based system will be able to differentiate malicious traffic from normal traffic. But what if an attacker is located on the network before the traffic training process? He can generate malicious traffic, and it will be included in the normal traffic pattern.

For example let’s say a user visits amazon.com, another one makes a SSH connection, but the attacker generates meterpreter’s reverse tcp traffic. Anomaly based system will include this on the normal profile. So in future, when anyone run Meterpreter on the network, anomaly based system won’t detect it. But we can say this scenario is not realistic. How can an attacker knows when the traffic is gonna be trained? It’s hard. We can count this under malicious insider threat.

In a realistic scenario, we expect that attacker can’t know when the traffic training is done. Therefore, we need to focus on post-training evasion. In this scenario we will assume that a trained anomaly based system watches the whole network. So we, as an attacker should establish C2-agent communication and exfiltrate data without causing any anomaly alert.

We need a post-exploitation framework for attacking purposes. We will stick with Empire for this. Empire is a PowerShell and Python based post- exploitation framework which is designed for ”assume breach” type of activities. We can describe Empire’s workflow in two parts: Agent and listener. Agent states the infected machine on the network which takes and executes given tasks on there. Listener is described as a communication server in which agent connects there, gets designated task and sends related output.

Empire supports HTTP and HTTPS (also Dropbox etc.) listeners for C2-agent communication. Even tough HTTPS connection encrypts all communication, we will assume there is a solution on the network which intercepts and decrypts SSL/TLS traffic. Because of that, HTTP listener will be the main focus.

So let’s assume an agent is deployed on the network. After the initial negotiation, agent will connect to C2 in every n seconds which is de-fined in ”DefaultDelay” option of the listener. Here is a generic request and response of this heartbeat connection:

We can list following traits which can be insight of an anomaly-based NIDS:

As seen in the example request, POST request body is encrypted and contains gibberish characters. If all users are browsing regular websites, this will be likely to flagged by anomaly detection system.

So we listed the traits which should be considered by an anomaly based system. We can gather the traits explained above in two different groups: Traits that can be changed in Listener’s option menu, traits that can be changed by changing Empire’s source code. Our tool, ”firstorder” won’t cover the second group. However, I will share my ideas anyway.

With which method, we can normalize the mentioned traits? The proposed solution is polymorphic blending attack. PBA is a useful technique to evade anomaly-based systems. From a high level of perspective, The idea is creating attack packets, which are matches to the normal traffic profile. To use this technique, attacker should know what is considered as normal. To do that, our model requires a traffic capture data of the network, after the normal traffic training is done. By checking the traffic capture data, our model will know what kind of traffic is used frequently. As a result, our main attack steps will be:

For the second group of traits which are explained on previous section, default HTML content can be chosen by identifying most visited websites in traffic capture data. However, normalizing POST request body of the communication is not achievable by using traffic capture data. As it explained in previous sections, POST requests are encrypted and contains gibberish characters.

If we encrypt the POST request body, it gives us power over signature-based solutions, because it won’t match with any malicious signature. However, anomaly based systems will flag this since it’s not like a normal HTTP data. On the other hand if we don’t use encryption in there, our problem is bigger. Now, signature-based IDS will catch us since it may contains some malicious indicators such as “whoami”, “cat /etc/passwd” etc. Also anomaly based IDS will catch this, same reason with the previous one, it’s not like a normal http data.

Instead of directly encrypting the data, we can use Markov Obfuscation tool which is created by Cylance Spear Team. (https://github.com/CylanceSPEAR/MarkovObfuscate) . This is a great and very underrated tool. So lets check the overall process in a basic chart: 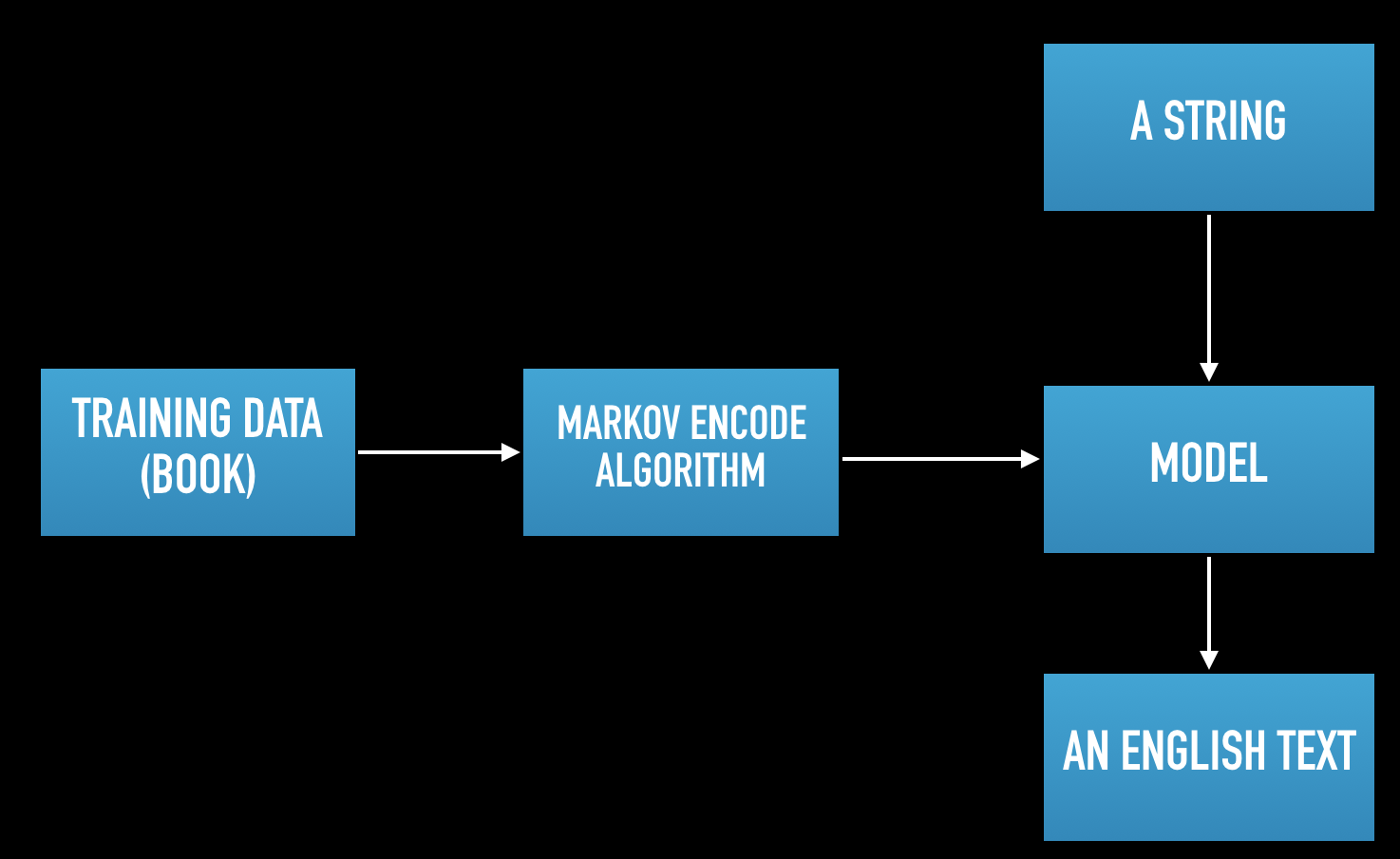 First, we need a training data which consists of lots of texts. Cylance team used a book for their demonstration. After then Markov Encode algorithm is trained by this text to build a model. When the model is built, it’s ready to encode any string, to a fairly meaningful English text.

For example this is the data of an “/etc/passwd” file. Normally, every IDS solution will flag this.

However, when we use an english book to generate a model, and encode that string with markov obfuscation tool, we got this result: 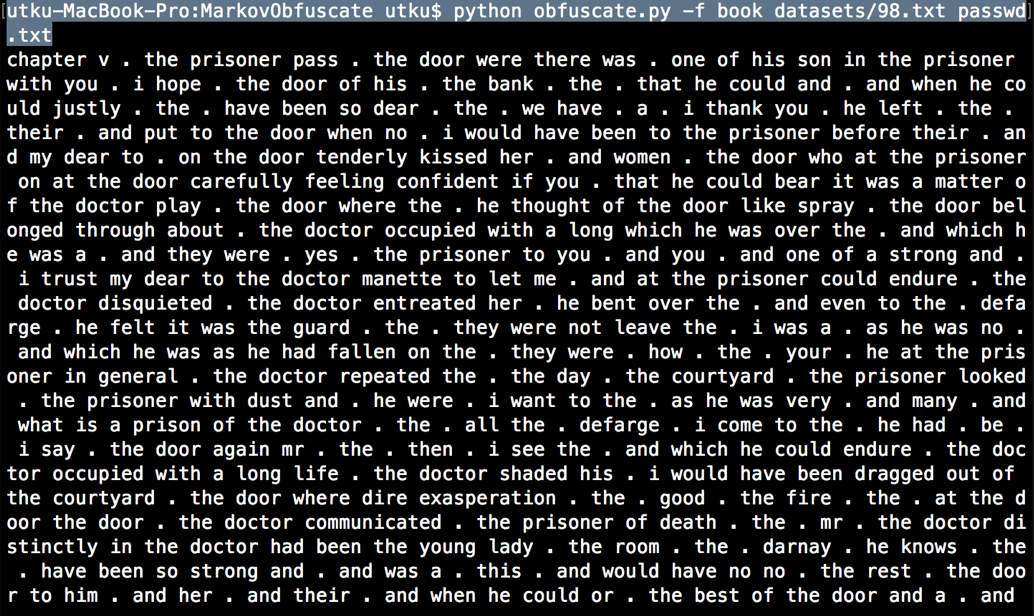 However, when it decoded by using same model, we will have the initial content of that “/etc/passwd” file.

Since the anomaly-based system will only see some English texts, it will think that it’s kind of blog post or a forum comment. Probably won’t raise any alerts.

But there are some drawbacks of this method. The first one is the training phase will consume time and resource of the deployed computer. Time may not be a very big problem but if there is a centralized resource monitor solution located on the network, blue team may identify these resource usage spikes. The other drawback is you need to implement Markov Obfuscation code inside the agent. Because, it should do these by own it’s own, we can’t send it some commands and expect an output at that point. This issue will increase agent’s file size.

So we created a tool called firstorder, which is written in Python. With given PCAP file, firstorder can extract key features of the network such as most used ports, most used user-agent values, server headers, how many different machines out there etc. According to these identified data, it automatically configures Empire’s listener.

You can check the usage on it’s Github page: https://github.com/tearsecurity/firstorder

So as a result, defense mechanisms are evolving to something smarter, something better. Maybe in future, signature based apporoaches will be totally abondoned. And there is a high probability that machine learning based defense mechanisms will be cheaper and wider than today. So, attackers should also evolve in this way. We need to find smarter ways to mislead artificial intelligence.